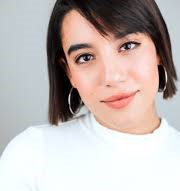 Gabi Campo is an actress, singer and dancer based in New York City and Los Angeles. Gabi’s most recent Broadway performance was in Ivo Van Hove’s revival of West Side Story. She’s also has to her name credits such as Broadway’s The Prom, an appearance on SNL, and numerous other theatre productions and roles such as Sally in Cabaret, Diana in A Chorus Line, and Kate in The Wild Party. Gabi is a graduate of Pace Musical Theatre Department.